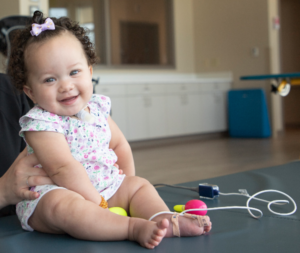 According to The Centers for Disease Control and Prevention (CDC), AFM is a rare but serious condition. It affects the nervous system, specifically the area of the spinal cord called gray matter, which causes the muscles and flexes in the body to become weak. The CDC estimates AFM syndrome occurs in one in a million people.

Opal was diagnosed with AFM in late February 2019. She was hospitalized in Oklahoma City before coming to The Children’s Center Rehabilitation Hospital in April, where she focused on intensive rehabilitation.

“As we prepare to discharge, we do so knowing we still have a long road ahead. But, looking back, we marvel and are so very humbled by how very far we have come,” said Gretchen Trimble, Opal’s mother.

Today Opal is home with her mom, dad, big brother and big sister, where she will continue her recovery.