The unique sounds of a ukulele could be heard in one of the hospital’s therapy gyms today as Jacarri Yarbrough performed a concert for his family, staff and patients. The 17-year-old has been a patient at The Children’s Center Rehabilitation Hospital since October 2017 due to an accidental shooting that left him paralyzed from the waist down. 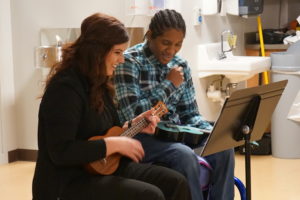 Jacarri enjoys listening and writing music, watching basketball and playing video games. During Jacarri’s time at the Hospital, he has taken classes to finish his high school diploma. Jacarri has also learned to play the ukulele from his music therapist Alexandra Robison. 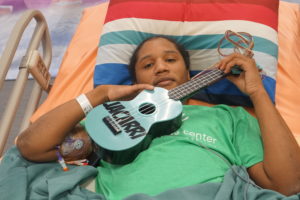 Jacarri poses with his Ukulele he received for Christmas

“Alex asked if I was interested in learning to play an instrument. She mentioned the ukulele,” said Jacarri, “and I was immediately drawn to that. It’s such a unique and interesting instrument. I love learning new songs and working with Alex.”

When Jacarri was younger he wanted to learn the guitar. His parents bought him a guitar when he was 11, but he never learned how to play.

“Jacarri is a very intelligent young man. In our sessions we address enhancing his music leisure skill in order to provide meaningful and rewarding activities during the rehabilitation process. One of the ways we addressed this was through learning chords and songs on the ukulele,” said Robison. 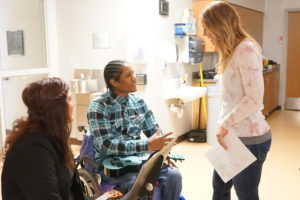 Jacarri talks to Jayci about his concert

Jacarri has formed a tight bond with one of the recreational therapists at the Hospital and made a promise to her he would perform for his family and the staff before going home. Jacarri fulfilled his promise.

When asked about a message he had for anyone who may be going through a rough time in life or trying to overcome obstacles Jacarri said, “It’s a process. It’s going to be hard you have to push through it. Don’t take anyone or anything in life for granted. The people around you are there to support you and they want to be there for you. Keep your faith, keep praying and never give up!”

Jacarri plans to graduate high school, and then go to college to become a neurosurgeon to help others.

To donate to the music therapy program at The Children’s Center Rehabilitation Hospital, click here.