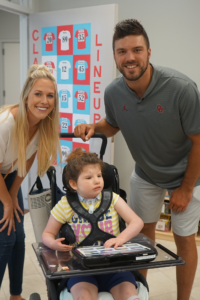 The Children’s Center Rehabilitation Hospital, a nonprofit pediatric hospital, announced today that Blake Bell, tight end for the Kansas City Chiefs, will serve as a member of the Hospital’s Honorary Board.  Bell will be part of a public relations and marketing campaign for the hospital, including public service announcements, speaking engagements, and social media outreach.

Bell played college football at the University of Oklahoma, where he received the nickname Belldozer. On April 2nd, Bell signed with the Kansas City Chiefs. He became familiar with the Hospital after receiving an invitation to take a tour with a family friend.

“I really enjoyed my visit at The Children’s Center Rehabilitation Hospital,” said Bell. “It was eye opening to see how amazing the hospital is and all the resources they have for the patients and their families. I look forward to many more visits in the future and excited to be an honorary board member.”

The honorary board members serve as ambassadors for The Children’s Center Rehabilitation Hospital, as well as support the Hospital’s fundraising efforts through personal and community influence. To learn more about the Hospital and its ambassadors please, click here.