He Weighed Less than One Pound at Birth 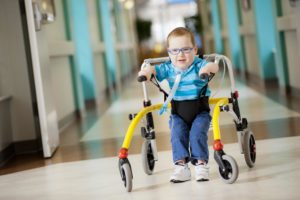 Corban Walkup was not supposed to survive birth, much less grow into a happy, active four-year-old boy. Fifteen weeks into her pregnancy with triplets, doctors advised his mother her babies had no chance of survival. Corban weighed only one pound when he was delivered, along with his brother Jordan, just 27 weeks into the pregnancy. Sadly, doctors were not able to save the third baby.

Corban and Jordan were taken immediately to the neonatal intensive care unit at The Children’s Hospital – OU Medicine following birth. Corban fought infections and struggled to survive. “I was at home when I got the call from the doctors saying Corban was not going to make it,” says Jeri, Corban’s mother. “When I got to the hospital, I saw this little finger pop up as if he knew I was there. I knew then we would keep on fighting.”

Promising MRI results showed Corban had no brain damage. “That was the first day Corban smiled at me,” Jeri remembers. Doctors felt a tracheotomy was vital to keeping Corban stable, and the results were encouraging. At that point, she knew she wouldn’t give up on her child.

The idea of a change in Corban’s care was intimidating for Jeri. However, he was admitted to The Children’s Center Rehabilitation Hospital just after his first birthday. “The changes I saw in Corban were amazing, even in the first six weeks,” she recalls. “He was doing things I never thought he would be able to do, because that’s what I had been told.”

Therapeutic leaves, which allow patients to be in their home environment, helped Jeri to become comfortable with caring for Corban on her own, knowing she had the support of compassionate medical professionals at the Hospital. “There is a comforting feeling knowing people love your child just as much as you do, and that is what Corban received at The Children’s Center Rehabilitation Hospital.”

Today, Corban is at home full-time in Enid, Oklahoma. He loves wrestling, playing with trucks and running on the soccer field. “The fact he doesn’t have to rely on the ventilator anymore and he gets to be home with our family is nothing short of incredible,” Jeri says. “The Children’s Center Rehabilitation Hospital provided the foundation for him to be the child he is today.”

Your membership into the Hospital’s new monthly giving program, 1898 Club, gives patients like Corban the chance to transition from hospital to home. To join the club today click here.