A Father’s Story: “She never left my side, I’ll never leave hers.” 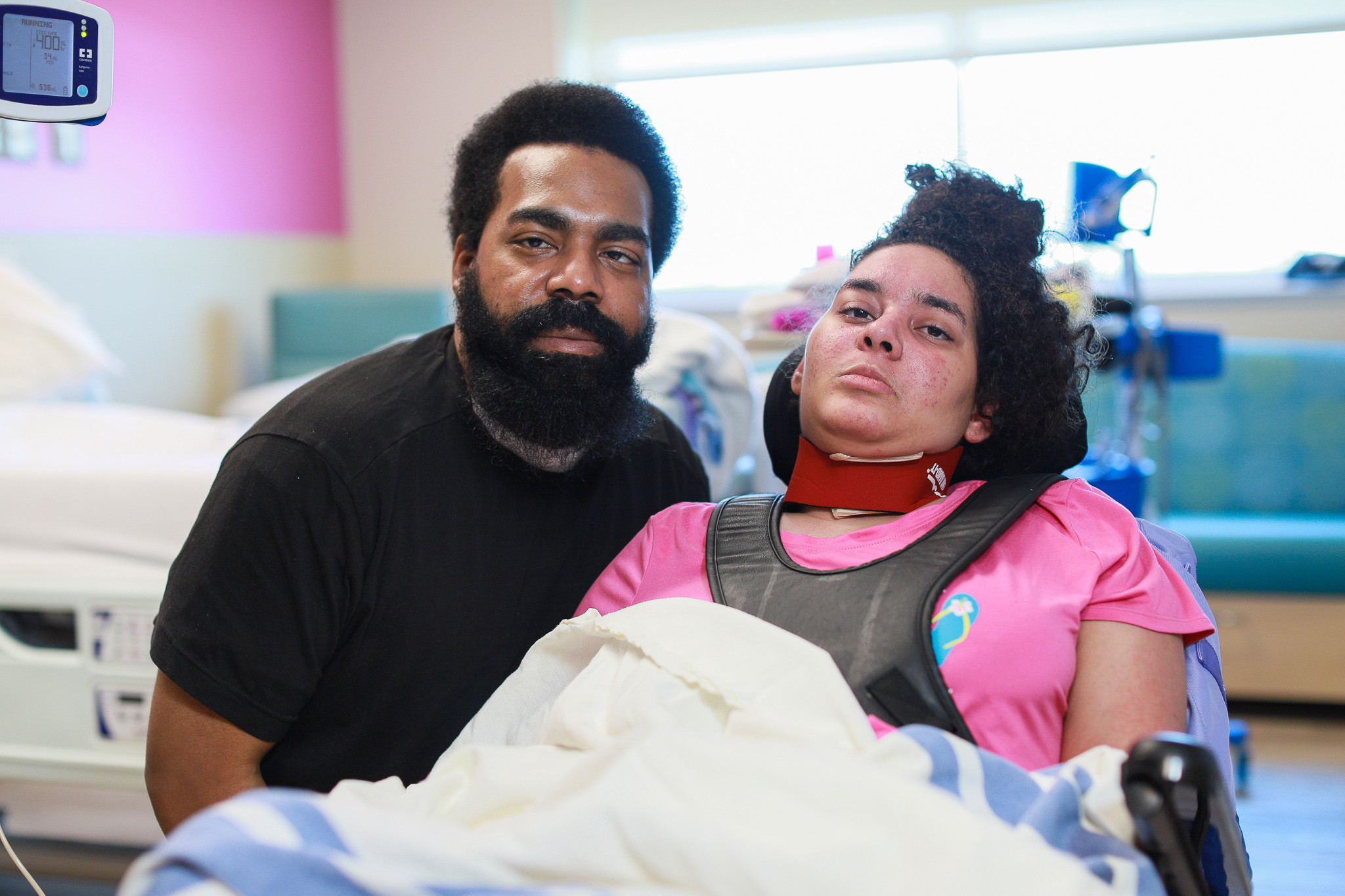 Terry hasn’t left Tellisa’s beside since blood vessel rupture in her brain. It’s the ultimate display of a father’s love.

Like many dedicated fathers do after a long day at work, Terry Jones was looking forward to getting home and spending time with his two sons and 16-year-old daughter, Tellisa. What should have been a routine evening turned into the beginning of a journey that would bring Terry and Tellisa to The Children’s Center Rehabilitation Hospital from Nevada.

“I got home from work, played video games with my sons and was relaxing in the living room when Tellisa came and laid her head on my chest complaining about a very bad headache,” Terry said. “I thought it was a bad migraine, but she kept saying, ‘dad, it really, really hurts.’ Soon after that, she blacked out.”

Tellisa had suffered an arteriovenous malformation (AVM) rupture in her brain. The damaged blood vessel caused blood to leak into the brain and reduced blood flow.

Because of Terry’s quick response in getting Tellisa to the hospital, she survived the rupture. Since that evening of Dec. 11, 2020, however, Tellisa has had three brain surgeries.

Early this year, Tellisa’s family learned about The Children’s Center Rehabilitation Hospital through their research for a hospital that would care for her and provide the rehabilitation services she desperately needs.

“When the team at hospital back home said they wanted to put Tellisa in a skilled nursing facility, her mom immediately began researching and looking for a place that would not just give up on Tellisa,” Terry explained. “That’s how we found The Children’s Center Rehabilitation Hospital, and I’m so glad we did.”

Terry has not left Tellisa’s side since the day he rushed her to the hospital. He has sacrificed everything, including his job and time with his sons.

“It’s a journey I want to be here for, and I’ll sacrifice everything for my family,” Terry said. “I am a mechanic by trade. I called my job the day after Tellisa went into the hospital and told them I would understand if they wanted to move on from me. They have been very gracious so far and told me to do what I need to do.”

The most difficult part about this journey for Terry has been his inability be in control and to make things immediately better for his only daughter, as he’s done since she was born.

“As a father, you pride yourself in fixing things and giving your kids everything. The toughest part about this journey is not knowing what kind of day Tellisa will have when she wakes up every morning. I want her to have great days and improve each day. But I also understand that it’s a process with ups and downs,” Terry explained.

Even though the journey hasn’t been easy, Terry says the staff at The Children’s Center Rehabilitation Hospital has exceeded expectations.

“Since we got here in March, everyone at the hospital has been friendly and nice. I love it. It’s something I didn’t expect, and a huge improvement from where we came from. Everyone here makes Tellisa feel important and that she matters,” Terry said. “The team here also cares about the families, too. It’s a home away from home. You don’t see this at other hospitals.”

Terry explained that sometimes he feels the cultural burden of fathers having to always be strong and not show their true emotions.

“Everyone expects you to be strong as a father, but sometimes, I look at her with tears in my eyes. I wipe them off and keep going because I know these tears will be tears of joy once it’s all said and done,” Terry said.

The love between father and daughter is unbreakable. Their desire to be next to each other is even more resilient. Terry hasn’t been back to Nevada or even left Tellisa’s bedside since they arrived in Oklahoma.

“When she was born, she never left my side. She always wanted to be next to daddy. I’ll never leave her side either,” said Terry.